Just as it sounds, the pelvic floor acts as the “floor” of the pelvic area. It extends from the pubic bone in the front to the tailbone in the back. It is made up of several muscles as well as connective tissues that act to support the functions of the reproductive, urinary, and digestive systems. Together, the muscles form a diaphragm or “sling” beneath the pelvis.

The pelvic floor has two functions: closing and supporting. First, the closure function is important for both continence and sexual health. This function allows the urethra and anus to close and open as needed in order to go to the bathroom at the appropriate time. It also allows the vagina to narrow or widen as needed for sexual intercourse or for the insertion of a tampon.

The second function is providing support to the abdominal contents and pelvic organs. The pelvic floor serves an important role in maintaining the appropriate intra-abdominal pressure. In the female body, the pelvic organs include the bladder, bowel, uterus, and cervix. Without the support of the pelvic floor, these organs would be unstable within the pelvis. The pelvic floor prevents conditions such as uterine prolapse, cystocele, and rectocele. Uterine prolapse occurs when the uterus descends into the vagina. Cystocele refers to the weakening of the wall between the bladder and vagina, while rectocele refers to the weakening of the wall between the vagina and rectum. Uterine prolapse, cystocele, and rectocele can cause serious dysfunctions of the reproductive, urinary, and digestive systems, not to mention significant pain and discomfort. 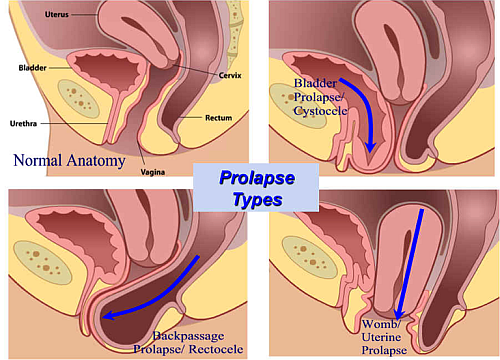 There is some debate as far as which pelvic floor muscles are considered superficial and which are considered deep. However, there is some consensus that the superficial pelvic floor is made up of three muscles called the external anal sphincter, perineal body and the puboperineal muscle, while the deep pelvic floor is made up of the pubococcygeus, ileococcygeuys, coccygeus and puborectalis muscles1 . The muscles of the pelvic floor overlap somewhat in function, but generally speaking, the deep muscles serve more to support, while the superficial muscles serve more to close and open. Since the layers of the floor serve different functions, it is important that both layers are strong.

Increasing amounts of research point to the significance of a strong pelvic floor for maintaining overall health. First, pelvic floor function has been linked to decreased incidence of lower back pain2. While it may be surprising that the pelvic floor has an effect on back pain, the two body parts actually work together. To understand this, think of the trunk as a container with the pelvic floor acting as the “floor” of the container. The diaphragm acts as the roof, while the abdominal and back muscles act as the walls of the container. The walls, floor, and roof all work together to maintain the structural integrity of the container. If any single wall is weakened, the integrity of the entire container can be compromised when pressure is increased inside. This occurs when an individual coughs, sneezes, laughs, and lifts, for example.  Once the structure is compromised, back pain can be a result of the trunk instability.

Continuing with the analogy of the container, weakness in the pelvic floor can cause two serious health problems: incontinence and prolapse. Prolapse, as discussed earlier, occurs when an organ from the pelvic cavity protrudes through the vaginal cavity. Incontinence refers to the inability to control the bowel and/or bladder voluntarily. If an individual has poor control or damage to their pelvic floor muscles, he or she is at high risk for developing incontinence. Having a strong pelvic floor will reduce risk of developing prolapse and incontinence.